The following is a tutorial for conducting a quality sentiment analysis of social media data (in this case Twitter). I describe what sentiment analysis is, how it started, and why it is important. I also offer a sentiment analysis process that I believe sums up the technique. I then introduce a valuable tool called SentiStrength. Following data cleaning and analysis, sentiment is visualized.

SentiStrength has already been employed by researchers and findings have been published in a range of scholarly research journals. I am quite confident that you will find this sentiment analysis tutorial beneficial.

What is Sentiment Analysis?

According to the Merriam-Webster’s Collegiate Dictionary, sentiment is defined as an attitude, thought, or judgment prompted by feeling.

How it all started?

Basic Sentiment Analysis: Classifying the polarity of a given text at the document, sentence, or tweet—positive, negative, or neutral.

Why is it important?

Sentiment analysis has attracted interest from researchers, journalists, companies, and governments. Opinions and sentiments are extracted to create structured and actionable knowledge that can be used by a decision maker.

The advent of social media has increased the value of sentiment analysis. Social networks are not only fueling the digital revolution, but also enabling the expression and spread of emotions and opinions through the network.

The most problematic figures of speech in NLP are irony and sarcasm. Another issue is of the rules to detect implicit sentiment (e.g., through misspellings or exclamation marks).

What are you interested in knowing? State the research question. Why does it matter? Who cares?

Define keywords through which you will get the desired data. Clearly defined search parameters are of vital importance in getting the right kind of data that relates to the initial research questions.

The clean data file can then be used to run the sentiment analysis.

Once the sentiment analysis is completed, data needs to visualized or put in an organized format to make sense of it. 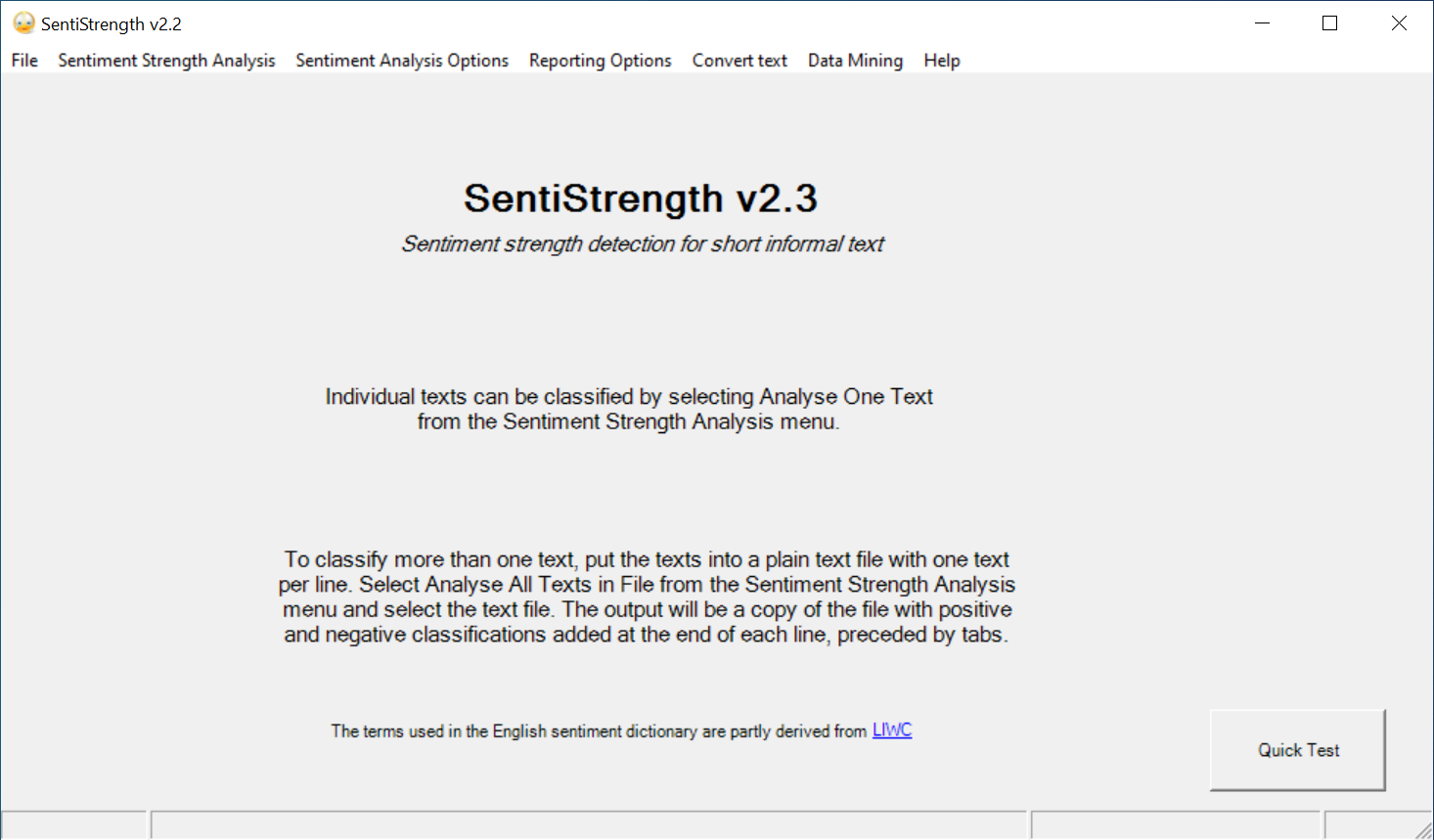 SentiStrength is free for academic research and can be tried live online or downloaded (Windows only) from http://sentistrength.wlv.ac.uk.

Before we start the analysis of social media data (in this case tweets), we need to clean the data and bring it in .txt file format so that it can be analyzed for sentiment in SentiStrength.

We will be analyzing the sentiment around the Boeing 737 Max airplane which had caught international news headlines. Twitter data was obtained for this purpose using the keywords “737 Max”.

The raw data from Twitter is depicted in the screenshot below.

You will notice that the data file has been cleaned for (i) Retweets, (ii) languages other than English (iii) text that made no sense.

For example, Spanish language tweets were deleted using the “filter” function in Excel.

We will export this worksheet and save it as a .txt file.

The clean data file just containing the tweets is ready to be analyzed for sentiment in SentiStrength.

Click on the .exe file and launch SentiStrength. As you will notice, the most recent version is 2.3 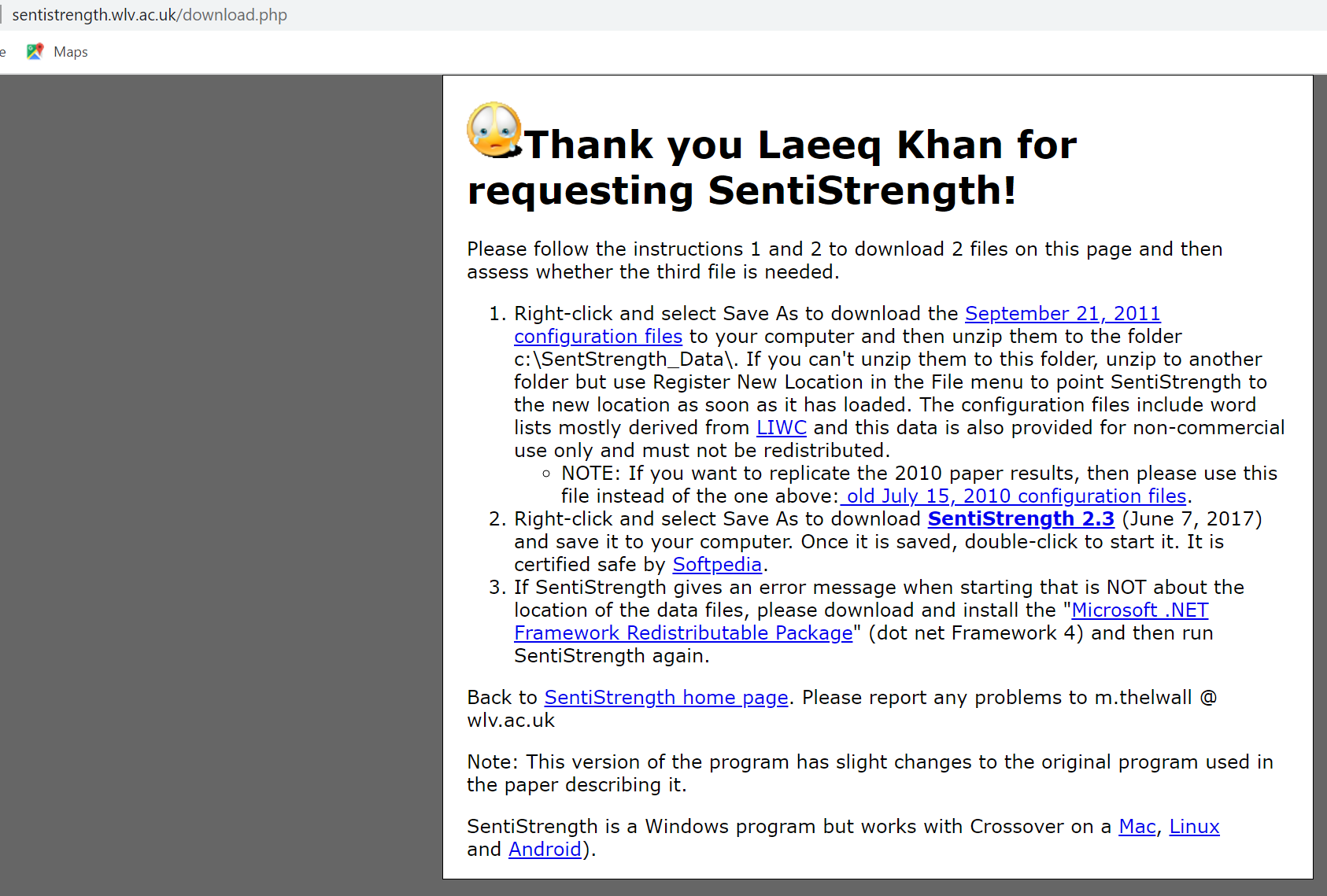 Explore the top menus. “Sentiment Strength Analysis” gives a list of options regarding the type of analysis that can be done. The following screenshot depicts the “Sentiment Analysis Options” which allows you to choose how you want your analysis to be done. 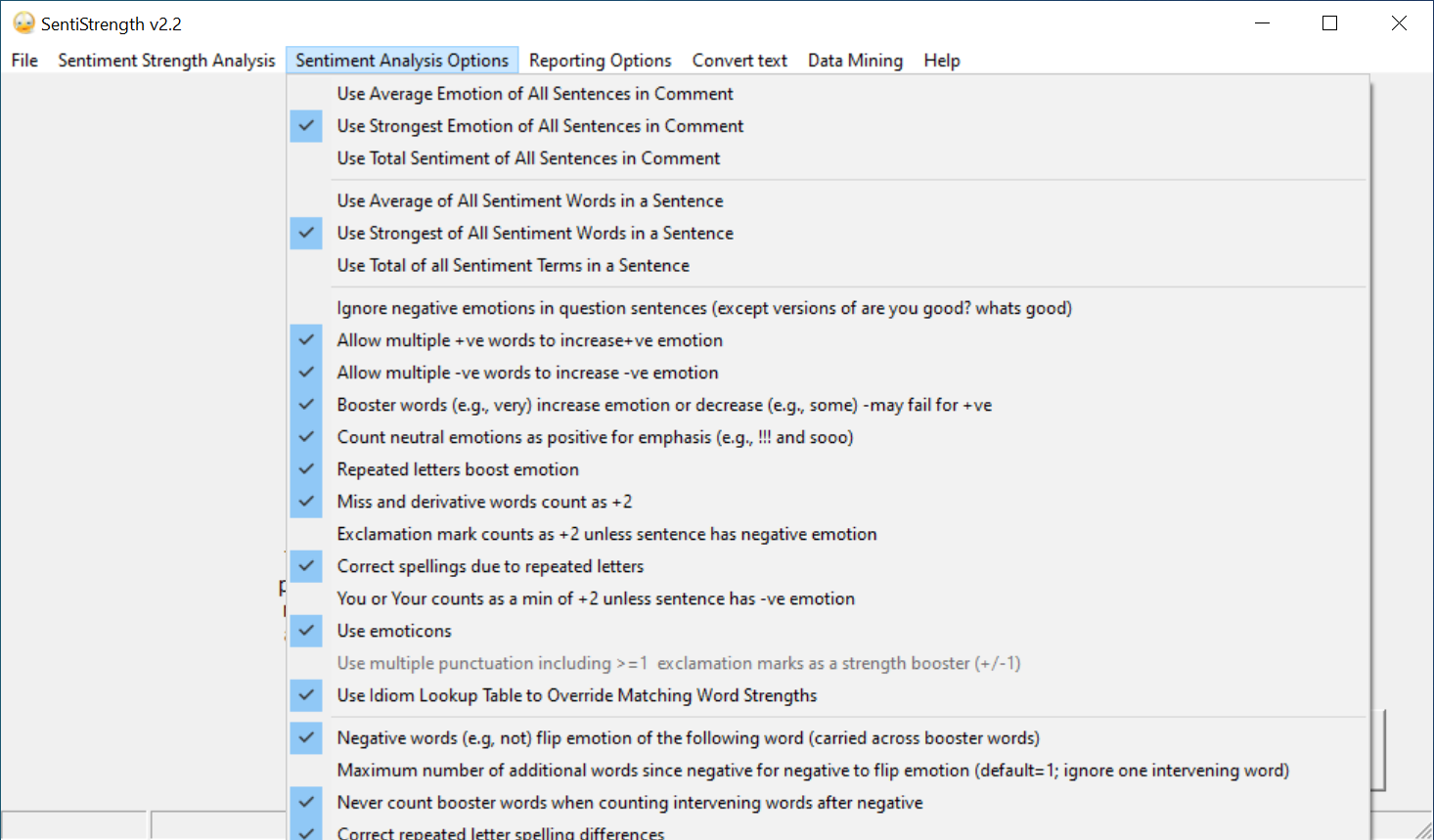 For this tutorial, we will be selecting “Analyse All Texts in File (each line separately)”. This is because our data file in .txt format contains all tweets in separate lines.

We can leave the default options selected.

From the “Sentiment Strength Analysis” menu, we will be selecting “Analyse All Texts in File (each line separately)”. You will be prompted to choose the data file. Select the clean data file in .txt format.

SentiStrength will now analyze the data and prompt to save a data file in which the sentiment has been performed (the file name will have “+results”).

This new file is in .txt format and now has to be imported in Excel so that the analysis can be understood.

Excel has a text import wizard which works when you try to open a .txt file.

You will see a sentiment column for negative and positive. There is also a column for emotion rationale which provides the sentiment score next to each word in the tweet.

The final step is to visualize the overall sentiment by creating a new worksheet with the two sentiment columns. While selecting the sentiment columns, click on “Insert” and then select a “Column” chart to create a chart.

You can create even better visualizations using Excel. As you can see in the above depiction, a simple column chart gives a general idea about the overall sentiment from this dataset.

View all posts by ProfessorKhan

Dr. Khan is an Associate Professor at Ohio University and the founding Director of the Social Media Analytics Research Team (SMART) Lab. As a computational social scientist he researchers user engagement, understanding its antecedents, and measuring its impacts in government, business, and organizational communication.